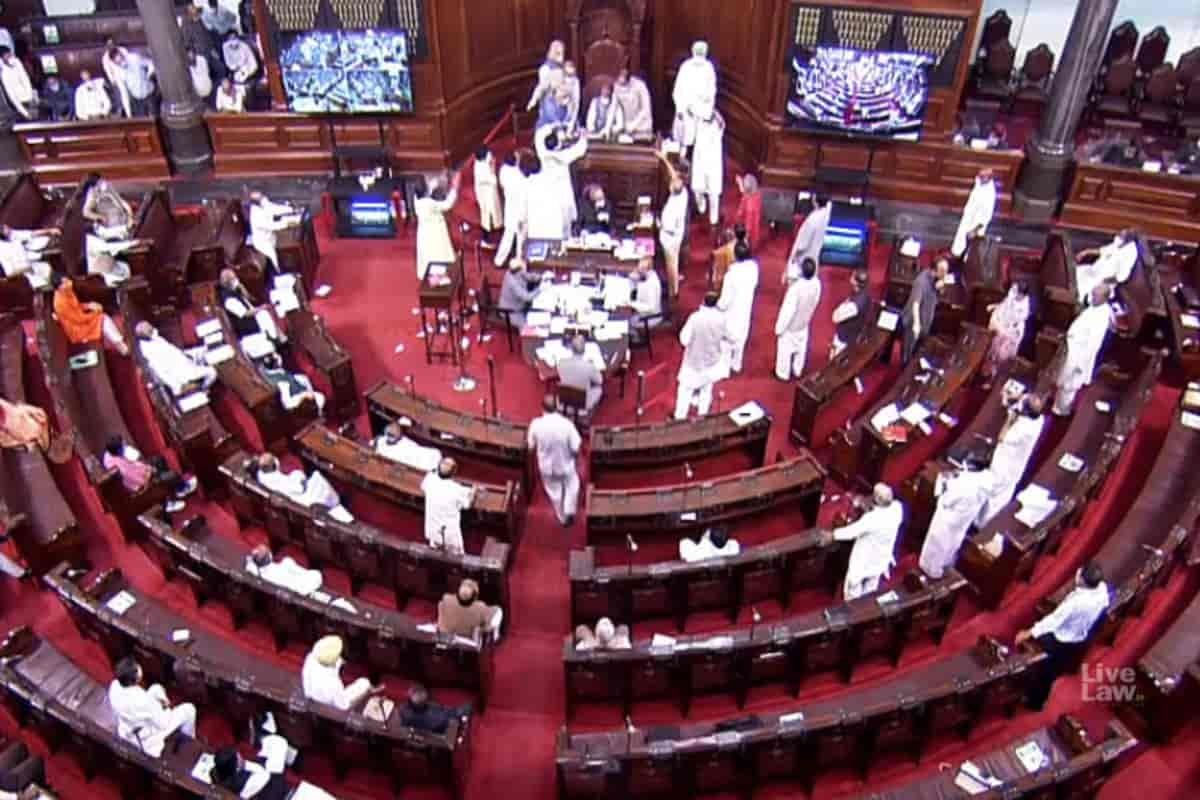 No regulation to attain a total ban of single-use plastic by 2022: YSRCP MP

Kotagiri Sridhar, YSRCP MP said that although PM Modi had talked about a total ban of single-use plastic till 2022, so far there is no regulation to reach there. Villages in India still extensively burn single-use plastic, and this, according to Sridhar, is a long term pandemic.

Shiv Sena MP Arvind Sawant alleged that government did not keep the promise of starting 4G internet services for BSNL. He requested the government to help BSNL and MTNL to recover from their current crisis.

The Rajya Sabha standoff continued on Monday afternoon with opposition parties planning to meet President Ramnath Kovind in this regard.

Strongly reacting to the suspension of opposition MPs, West Bengal Chief Minister Mamata Banerjee tweeted: “Suspension of the 8 MPs who fought to protect farmers interests is unfortunate and reflective of this autocratic government’s mindset that doesn’t respect democratic norms and principles. We won’t bow down and we’ll fight this fascist govt in Parliament and on the streets.”

The House was adjourned for the fifth time till Tuesday.

Bhubaneswar Kalita, who is presiding over the session, once again urged the suspended opposition MPs to leave the premises.

Unable to convince the opposition to stop their protests, the House was adjourned till 12 pm.

Chaotic scenes continued to be witnessed in the Upper House. Bhubaneswar Kalita took over the Chair to preside over the proceedings. Opposition leaders also surrounded the well of the House.

The session begins in Rajya Sabha

The session in the Rajya Sabha has resumed.

Despite assurances from the Pokhriyal that the Leader of Opposition will be allowed to speak once the suspended MPs leave, the opposition leaders continued to protest. The House was adjourned for the third time, till 11.07 am.

Amid continuous protests, the Upper House was once again adjourned till 10:36 am.

Education Minister Ramesh Pokhriyal Nishank, who is presiding over the Rajya Sabha, urged the suspended MPs to leave the premises, for further business in the House.
Rajya Sabha resumes

The session in the Upper House resumed at 10 am amid continuous protests against the suspension of the opposition MPs.

Rajya Sabha adjourned till 10 am

Amid strong protests by opposition parties, the House was adjourned till 10 am.

Muraleedharan moves a motion of suspension against 8 opposition MPs

Taking note of the ruckus on Sunday.

The notice period of 14 days is required. I rule that the motion by LoP and other members is not admissible,” Naidu said. Amid strong protests, Naidu said: “I order Mr Derek to leave the house.”
A no-confidence motion against Deputy Chairman rejected

He also rejected the no-confidence motion against Deputy Chairman Harivansh.

The Speech on the ruckus yesterday, Rajya Sabha Chairman Venkaiah Naidu said: “I was pained yesterday. All social distancing and COVID protocols were violated yesterday. Whatever happened yesterday defied logic. It was a bad day for the Rajya Sabha. Some members came to the well of the House and threw papers. They damaged the mic of the deputy chairman and also threw papers at him. You have no right to obstruct the chair and the business in the House. It tarnishes the image of the House. Is it a Parliamentary standard? I suggest to the members to do some introspection. If marshals were not called on time, what would have happened? This should not be allowed. If you have any problem, the only way is to discuss it. The Deputy chairman was physically threatened. I was worried about his physical being. If the government wants, they can move a resolution. I have received a letter from the Opposition, urging no confidence against the deputy chairman.”

The Bills for consideration today

* Taxation and Other Laws (Relaxation and Amendment of Certain Provisions) Bill, 2020

Congress MP KC Venugopal today gave a Zero-Hour Notice in Rajya Sabha over the “refusal of banks to give loans”. TDP MP K Ravindra Kumar gave a similar notice in the House over the “need for stringent punishment for atrocities against Dalits”. BJD MP Prasanna Acharya gave a Zero-Hour Notice and has demanded to rename Paradip Port after former Odisha chief minister Biju Patnaik.

The session in the Rajya Sabha has begun.

The eighth day of the Monsoon Session in Parliament will be held on Monday. While the session in the Rajya Sabha will be held from 9 am to 1 pm, proceedings in the Lok Sabha will begin at 3 pm. Follow our blog for all the latest updates.

No More Comments in this live blog.

TMC member Derek O’Brien attempts to tear the Rule Book during the ruckus in Rajya Sabha on Sunday. (Screengrab)

The government pushed through two key farm Bills in Rajya Sabha on Sunday amid unprecedented scenes of chaos, confusion, and ruckus. Agitated Opposition members, protesting the extension of the House sitting beyond the scheduled end at1 pm, tore copies of the Bills, broke microphones on the Chairman’s table, flung a copy of the Rule Book at the presiding officer, and then sat on a dharna in the House even after it was adjourned for the day.

Never unsure of its numbers in the Upper House, and given that many Opposition members have cited health reasons to stay away, the government, using its numerical strength, rejected the Opposition demand to refer the Bills —

The Farmers’ Produce Trade and Commerce (Promotion and Facilitation) Bill, 2020, and The Farmers (Empowerment and Protection) Agreement of Price Assurance and Farm Services Bill, 2020 — to a select committee for parliamentary scrutiny.

It has already cleared by Lok Sabha, the Bills, passed by voice vote, will now go to the President for assent before becoming law. Prime Minister Narendra Modi, in a series of tweets after the passage of the Bills in Rajya Sabha, described it as “a watershed moment in the history of Indian agriculture” while BJP members called it “historic… a big reform”.