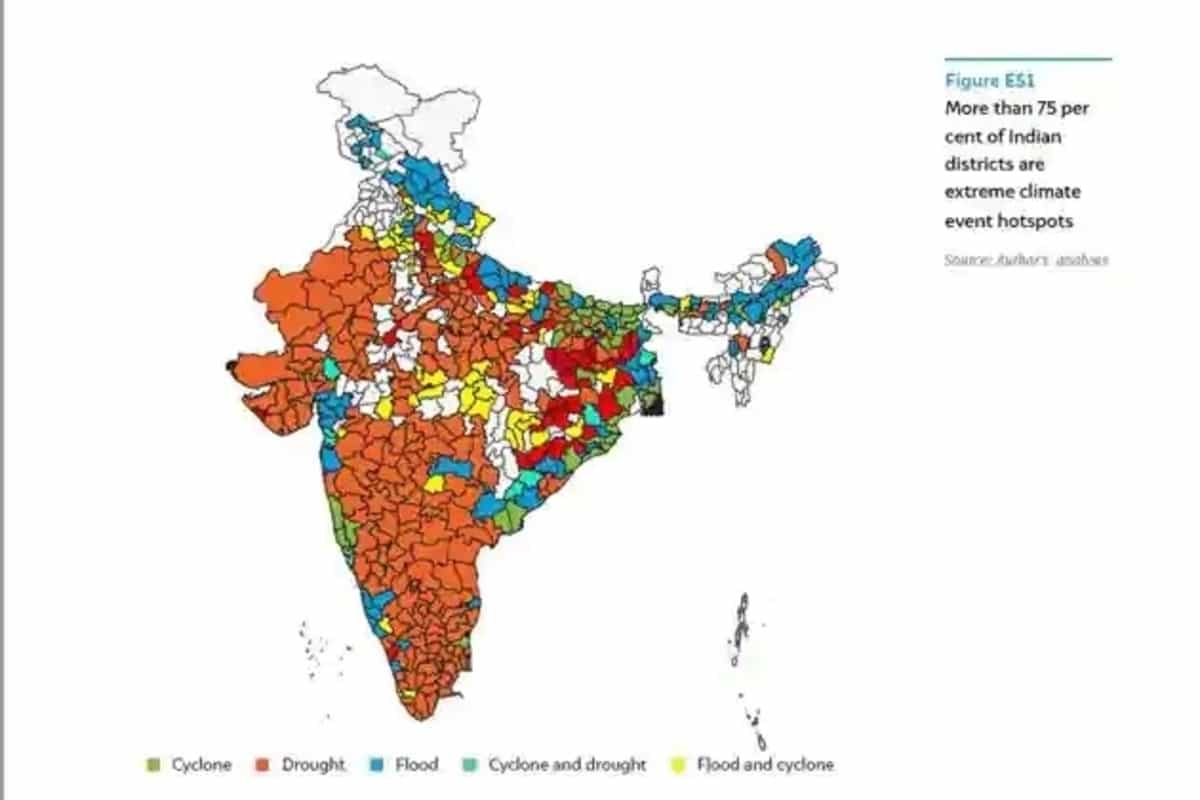 A new report has found more than 75% of India’s districts are hot spots of extreme climate events. With an unusual spike in extreme events since 2005, these districts are bearing the effects of changing microclimate with loss of property, livelihoods and lives.

Coming on the heels of United Nations Environment Programme’s Emissions Gap Report 2020 that warned on Wednesday that the world was heading for a temperature rise of over 3 degree C this century, the Council on Energy, Environment and Water (CEEW) report has highlighted that even with a 0.6 degree C rise in temperature over the past century, India is facing devastating consequences.

While India witnessed 250 extreme climate events (drought, floods, cyclones and compounding events like floods and cyclones) between 1970 and 2005, it recorded 310 extreme weather events after 2005. The report released on Thursday also found a shift in the pattern of extreme climate events such as flood-prone areas becoming drought-prone and vice-versa in over 40% of the districts.

The pattern reflects what’s happening globally: Extreme weather events resulting from climate change led to 495,000 human deaths across the world in 1999–2018. More than 12,000 extreme weather events led to losses worth USD 3.54 trillion (measured in terms of purchasing power parity or PPP) during this period.

The CEEW report titled: Preparing India for Extreme Climate Events has estimated that 97.51 million people are exposed to extreme floods in India. There has been an abrupt surge in the number of extreme flood events since 2005. Between 1970 and 2004, 3 extreme flood events occurred per year on average, but after 2005, the yearly average rose to 11. Similarly, the annual average for districts affected by floods until 2005 was 19, but after 2005 it jumped to 55.

The year-wise analysis shows how changes in microclimate processes have altered the frequency and pattern of extreme flood events. Six of India’s eight most flood-prone districts in the last decade — Barpeta, Darrang, Dhemaji, Goalpara, Golaghat, Sivasagar — were in Assam.

After 2005, the yearly average number of districts affected by cyclones tripled and the cyclone frequency doubled. In the past decade, 258 districts were affected by cylones with hot spot districts being Chennai, Cuttack, East Godavari, Ganjam, Nellore, North 24 Parganas, Puri, and Srikakulam – all along the eastern coastline. The east coast’s warming regional microclimate, land-use change, and degrading forests are triggering the region’s cyclonic activity, the author has said.

The analysis shows that the decade 2000–2009 showed a spike in extreme flood events and in associated flood events, which affected almost 473 districts. The compounding effects of land subsidence, the urban heat island phenomenon, and sea-level rise due to glacial melts are leading to the intensification of cyclonic disturbances, thus increasing the number of flood events experienced during the decade and making it an outlier.

Some of the extreme events are also associated with the weakening of monsoon. “The empirical evidence generated from our analyses coincides with the weakening of monsoons due to rising micro-temperatures. This further can be validated by the fact that states like Maharashtra, Karnataka, and Uttar Pradesh saw severe water scarcity during 2015 due to record-breaking temperatures during summer and weakening monsoons,” the report states.

An interesting trend that the report has highlighted is swapping of the nature of extreme events in some districts. Several traditionally flood prone districts such as Cuttack, Guntur, Kurnool, Mahbubnagar, Nalgonda, Paschim Champaran, and Srikakulum are becoming drought prone in recent years. Coastal southern Indian states such as Andhra Pradesh, Tamil Nadu, and Karnataka are increasingly witnessing more droughts. Further, floods and droughts coincide during the same season in several districts of Bihar, Uttar Pradesh, Odisha, and Tamil Nadu.

“I agree with the findings of the report. I will not be able to comment on the exact numbers immediately though. In general, there is a spike in extreme weather events particularly extreme rainfall and heat wave events. Changes are being seen in the spatial pattern of extreme weather events also. Our climate models are showing that these trends will continue for the next few years so we need to worry,” said M Rajeevan, secretary, ministry of earth sciences.

“These changing patterns are due to micro-climatic changes across the Indian subcontinent that are triggered by local climate change drivers such as land-use-surface change, deforestation, encroachments upon mangroves, and wetlands,” the report adds.

The author of the report, Abhinash Mohanty has coupled information available from globally validated data sheets with data from other sources like the India Meteorological Department, World Meteorological Organization (WMO), and Press Information Bureau (PIB). The team has then developed a gridded exposure sheet of climate events; and a geospatial analysis of extreme climate events using coarse grain resolution temporal maps.