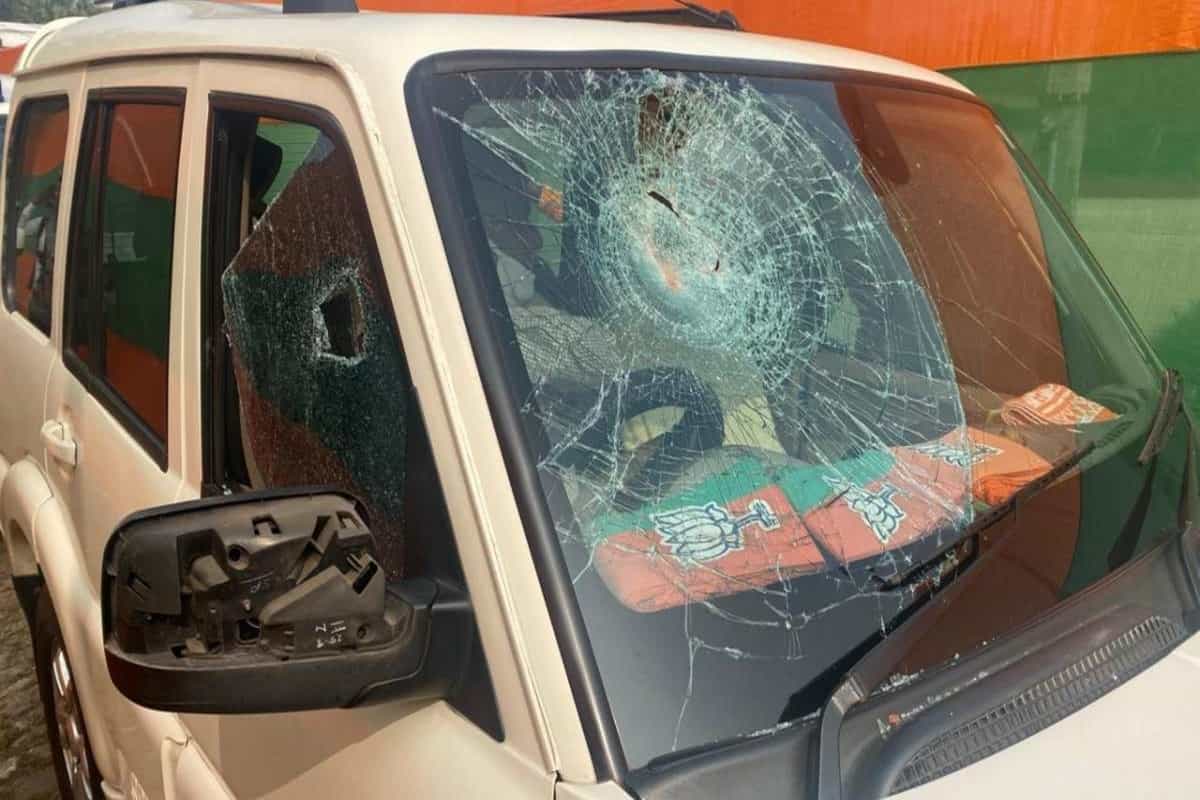 The convoy of BJP national president J P Nadda, which also included vehicles of other senior BJP leaders, was allegedly attacked with stones and bricks while on its way to Diamond Harbour in Kolkata on Thursday. A number of cars, including that of BJP national general secretary Kailash Vijayvargiya and West Bengal BJP chief Dilip Ghosh, were damaged in the attack.

“Trinamool Congress workers sporting party flags and armed with lathis attacked our convoy at multiple places. Stones and bricks were hurled by TMC workers. Several cars have sustained damage. Police were mute spectators in some places and missing elsewhere,” alleged Ghosh. In defence, TMC MP Sougata Roy said: “It is not possible to cover every inch of the route with policemen. Spontaneous protests by the people may have happened in some places. That is what I saw.”

Bengal Governor Jagdeep Dhankhar expressed concerned over the “alarming reports of anarchy and lawlessness” and said rued that such incidents took place even despite his intimations to the Chief Secretary and Director General of Police.

On Wednesday, the state BJP president, in a letter to Home Minister Amit Shah, had informed about protests being planned by the “goons of TMC” at different places “on the way towards Diamond Harbour from New Town”. He also alleged security lapses during Nadda’s Wednesday events in the state. In the letter, Ghosh said, “Today during his (Nadda’s) different programmes in Kolkata, it was observed that there were serious lapses in security arrangements, purportedly due to negligence and/or casual approach of state police department.”

Nadda is in West Bengal to participate in an ongoing mass outreach campaign launched ahead of the assembly elections that is just six months away.

According to reports, Trinamool Congress workers were protesting against the new farm laws near Sirakhol on Thursday. When the BJP convoy was passing by, stones and bricks were thrown at the cars that had slowed down in the narrow two-lane road. A number of cars, including that of Vijayvargiya, Ghosh and security officers sustained damages and their windscreens were smashed.

In the letter to Amit Shah, Ghosh had also alleged that at the BJP’s party office in Hastings, “there was a mob of 200-plus with sticks, bamboos, etc. demonstrating by raising black flags”. “Some of them climbed the cars parked outside the office and raised slogans. Police dod not intervene to stop them and casually allowed them to come within a close perimeter of Naddaji’s vehicle,” he wrote.

There has been a security lapse during party president JP Nadda’s visit to the state. There was no presence of police at his events yesterday. I’ve written to Home Minister Amit Shah & administration here: West Bengal BJP Chief Dilip Ghosh in Kolkata pic.twitter.com/2b7UoAi5H8

While participating in an outreach programme, Nadda had on Wednesday accused West Bengal Chief Minister Mamata Banerjee of being synonymous with “intolerance”, and exuded confidence about forming the next government in the state winning more than 200 seats. He criticised the “dynastic politics” of the TMC and other parties in the country, and asserted for the BJP “party is family”.