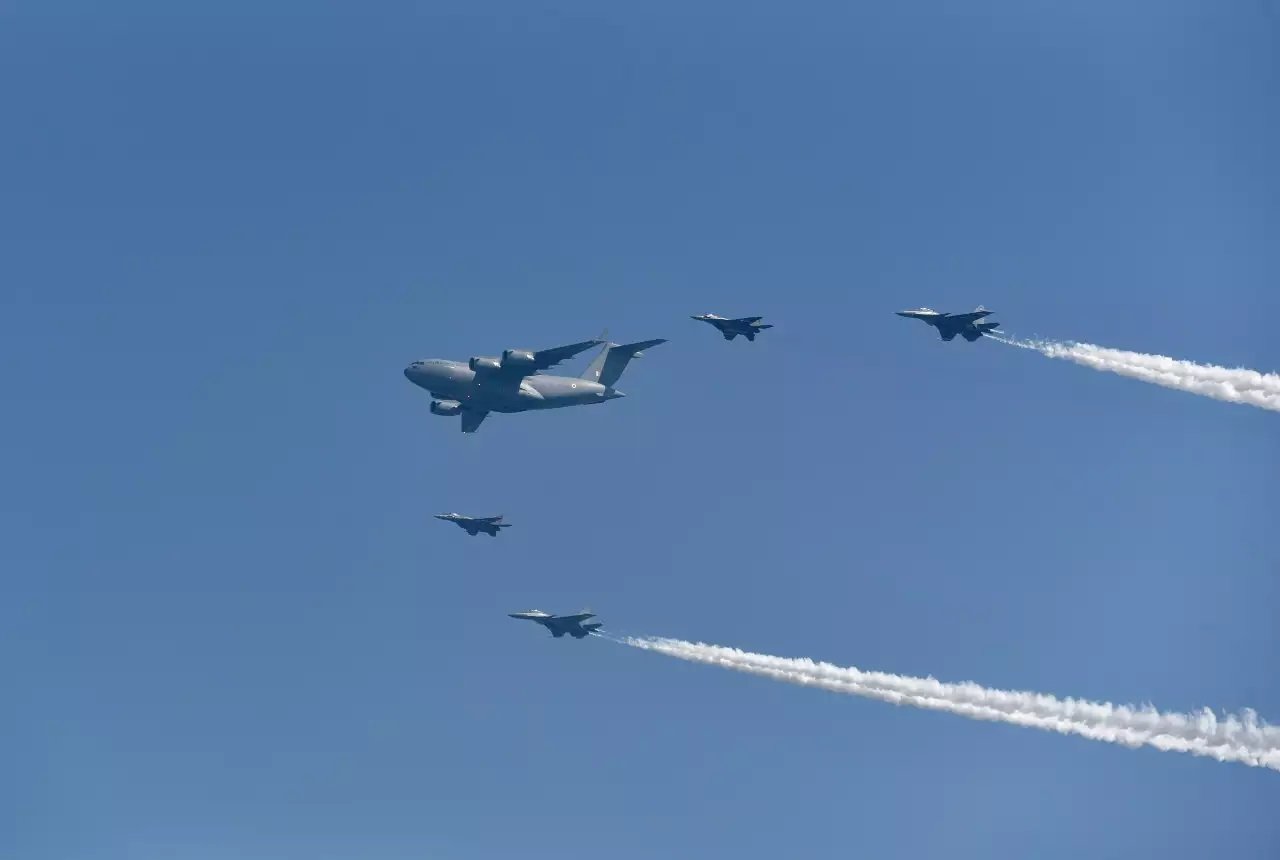 NEW DELHI: Indian Air Force Day on Thursday commemorated its foundation day. The Air Force Day is celebrated to mark the day the IAF was established in 1932. The force will celebrate its 88th anniversary this year.

The commemoration will be marked by a flypast by a host of aircraft and choppers, including the newly inducted Rafale fighter jets.

#WATCH Rafale fighter jet carries out a minimum radius turn within an area smaller than a hockey field forming a figure of eight, on the 88th IAF day, at Hindon airbase pic.twitter.com/3GB7CMs0YX

The President said, “On Air Force Day, we proudly honour our air warriors, veterans, and families of the Indian Air Force.”

He said the nation remains indebted to the contribution of the IAF in securing skies and assisting civil authorities in Humanitarian Assistance and Disaster Relief.
The president said he is confident that in the years to come, the Indian Air Force will continue to maintain its high standards of commitment and competence.
The ongoing process of modernisation with the induction of Rafale, Apache and Chinook aircraft will transform the Indian Air Force into an even more formidable strategic force, said the President.

#WATCH: Flares fired by the Eklavya formation including Apache and Mi-35 attack helicopters at the Hindon Air Base in Ghaziabad.#AirForceDay2020 pic.twitter.com/ps70ymRp3X

In a tweet in Hindi, PM Narendra Modi said, “Many congratulations to all the brave warriors of the Indian Air Force on Air Force Day. You not only keep the skies of the country safe but also play a leading role in the service of humanity in times of disaster. Your courage, valour and dedication to protecting Maa Bharati is inspiring for everyone.”
He also attached a short video highlighting the importance of Air Force Day. In the one minute 19 second video, Modi says, the journey of IAF began on October 8, 1932, with six pilots and 19 Air Force personnel. And now Indian Air Force is one of the strongest air forces across the globe and this journey is incredible.

IAF will always guard the nation’s skies, come what may: Rajnath Singh

The Defence Minister Rajnath Singh extended his greetings and best wishes to all air warriors and their families. He expressed his commitment for enhancement of IAF’s combat capability through modernisation and indigenisation.

“I am confident that the IAF will always guard the nation’s skies, come what may. Here’s wishing you blue skies and happy landings always,” he said.

“I commend all air warriors for quick response in the recent standoff on the northern frontiers when we deployed our combat assets at short notice to handle any eventuality and provided proactive support to all requirements of deployment & sustenance for Indian Army,” said IAF chief Air Chief Marshal Rakesh Kumar Singh Bhadauria.

“This year has indeed been an unprecedented one. As Covid-19 spread across the globe, our nation’s response was firm. The tenacity and resolve of our air warriors ensured that IAF continued to retain its capability to undertake full-scale operations throughout this period,” he added.

What aircraft are participating in the ceremony?

A total of 56 aircraft will be there for aerial display and 11 jets on static display. As per the full dress-rehearsal, Tejas LCA, Jaguar, Mig-29, Mig-21 and Sukhoi-30 aircraft were part of the ceremony. IAF’s helicopter fleet like Mi17V5, ALH Mark-4, Chinook, Mi-35 and Apache were also part of the flypast, along with planes like C-17, C-130, Dornier and DC-3 Dakota. Suryakiran aerobatic team and Sarang aerobatic team will also be displaying their skills during the flypast.