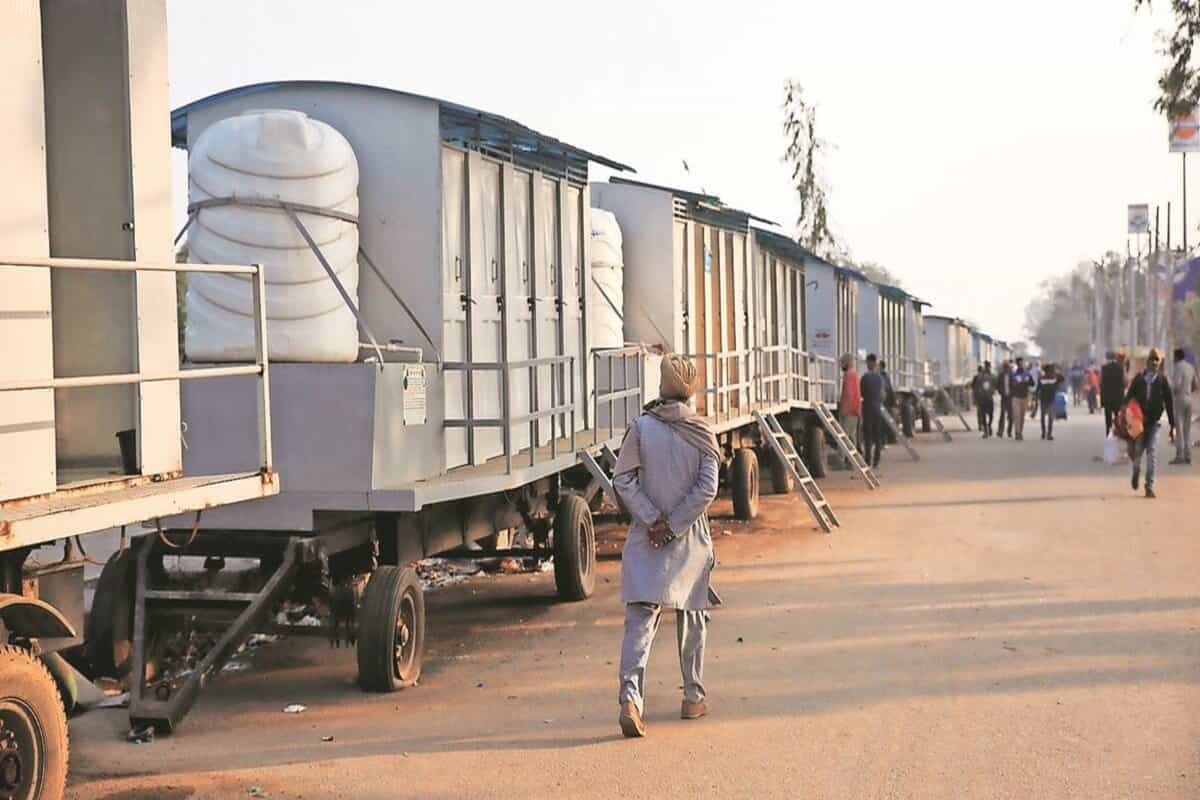 Last January, Yashpal Singh installed 11,000 toilets at the Kumbh Mela 2019 in UP’s Prayagraj, so installing and maintaining 370 toilets at the Singhu border is not a herculean task for the 30-year-old. Yet, he’s at work every day for over 12 hours, supervising the 37 men who keep the toilets, provided by Bhutani International, “clean-ish” at the protest site where thousands of farmers have been camping since November 26.

“We have been given the tender by Delhi Urban Shelter Improvement Board (DUSIB) and have been here since December 2. There are Indian toilets and western commodes too. There are 37 vehicles with 10 toilets each,” said Singh. There is a row of toilet vehicles just before the barricades at Singhu border. Manoj (34), with his neon green jacket and a broom in hand, is one of those tasked with keeping the toilets clean. “I have been doing this for two years, and I am being paid Rs 400 a day. Some days, I do a single 10-hour shift, other days, I opt for overtime and do two shifts… The problems remain the same — some leave the tap open, others don’t flush properly. We try to do our best,” he said.

At a village nearby, the company has rented two large rooms where the 35-plus contractual employees stay. “The first shift begins at 5 am and goes on till 1 pm, the other one begins at 1 pm and goes on till 11 pm. There are very few people who use the toilet late at night, and it’s too cold to ask anyone to clean,” said Singh.

Apart from this, there are 11 toilets at the Guru Teg Bahadur Memorial nearby, frequented by protesters who are staying inside the premises as well as those who take shelter in their trolleys and tractors. Amit (40), the sanitation supervisor there, said he has a team of eight men who clean the 11 toilets at the Memorial, which is spread across an 11-acre area. He said, “Each year, at least one big gathering takes place here, which we are now used to managing, but this is the first time that the numbers are this high and for so many days.”

Among those tasked with cleaning the toilets at the Memorial are 24-year-old Pramod, who hails from UP’s Muzaffarnagar, and Pradeep (28). “Our salary is Rs 13,500 a month for working six days a week, from 8 am to 5 pm. Thankfully, there are so many portable toilets in the area now so the pressure is distributed. The protesters are unlike any other we have seen — many ask if they can help,” said Pradeep.

Plus DUSIB has placed two vehicles with 10 toilets each as well. While the cubicles were relatively clean, the lack of water was a grouse many held. “The sheer number of people here is staggering so we understand some problems… They do get addressed quickly too. We are grateful to the Delhi government for this,” said Manjot Singh (26), who has come to Delhi from Punjab’s Bathinda.

A few kilometers away from the stage is Hemkunt Foundation’s ‘Tent City’ — 150 water-proof tents that accommodate over 500 people at a petrol pump, with two toilets. Harteerath Singh (19), community development director on site, said the tents are occupied by elderly farmers, protesters with young children, and women students of Panjab University. “Our own volunteers — students, MNC employees — clean the toilets, in two shifts. We also provide sanitary napkins to women. By Saturday, we will set up more tents, and will be able to accommodate 1,000 people,” said Singh.

Ashwani Aggarwal and Sahaj Umang Singh of Basicshit.org — an organisation that builds portable, waterless toilets using single-use plastic — have meanwhile set up a ‘Bibiyan da toilet’ after a day-long recce. “We realised women are having a lot of trouble accessing clean toilets, so we have set up one. We had set up three at the Shaheen Bagh protest but two were destroyed when the protest site was cleaned up in March. Hopefully, we will get funds and can set up more,” said Singh.

At Tikri border, more than 300 portable toilet cabins have been put by the Haryana and Delhi government for farmers, and there are over 50 sanitation workers deployed. Mumtaz (24) and her sister, who live nearby, reach the site at 8 am daily and begin cleaning the toilets as well as the road. “We’ve been working here for more than two weeks now, from 8 am to 6 pm. It’s exhausting work… There are thousands of people here. We carry bags to collect the waste from the toilets and roads, and by the end of the day, it weighs more than 30 kg,” said Mumtaz.

A senior district official from Bahadurgarh said, “We have deployed several workers on the ground. A lot of waste is generated during the day due to food, toilets and the transport of materials. We have sent more than 200 vehicles with toilets and also placed other cabins to be used as toilets. Workers are deployed till evening to clean the roads and toilets.”

On Thursday afternoon, 45-year-old Rakesh, a contractual worker with the Haryana government, was told to clean five toilet cabins. With a toilet plunger and a broom in hand, he began his work. “I don’t keep a count now. I clean all the toilets with a plunger. I also have to check the water and the flush. There’s a lot of work here but I get food. The farmers also give me packed food for my children

AIMIM party worker held for shooting at 2 over cricket match