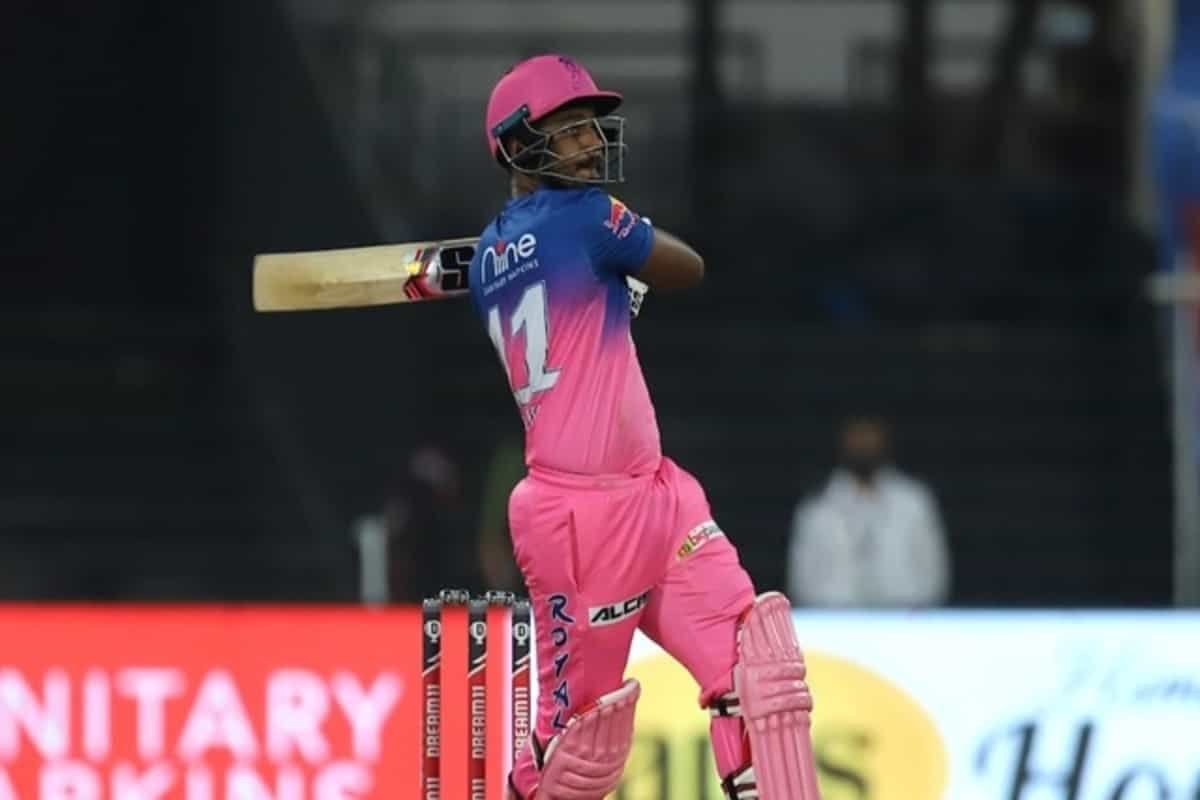 The Elite E Group match of the Syed Mushtaq Ali Trophy 2021 will be played between Kerala and Puducherry, at the Wankhede Stadium in Mumbai.

The match is scheduled to start at 7:00 PM local time and IST.

Kerala and Puducherry are not teams fans and pundits expect to see in the semi-finals of the Syed Mushtaq Ali Trophy, but they showed last year that they are capable of causing quite a few upsets. Kerala finished fourth in their group last year.

Heavyweights like Uttar Pradesh finished below Kerala. On the other hand, Puducherry also finished fourth on their group, ahead of teams like Assam and Meghalaya. They both will be eager to go one step further this time and at least get a top 3 finish in the group, if not the semi-final berths.

It will be hot in Mumbai tomorrow, with the temperature being around 29 ° during the evening. The chances of rain are only 10%.

The pitch here at Wankhede is usually batting-friendly, and such was the trend in last season’s Syed Mushtaq Ali Trophy as well. A score of 180 around should be competitive.

(Will be added when there is an update)

Sachin Baby was Kerala’s most consistent run-scorer in Syed Mushtaq Ali Trophy 2019. He scored 225 runs at an average of almost 40.

Sanju Samson only played 4 games last season, but he was decent with the bat in those games. He scored 112 runs at an average of nearly 30.

The vastly experienced Robin Uthappa scored 139 runs in the last season of Syed Mushtaq Ali Trophy, which included one half-century.

Jalaj Saxena was Kerala’s best bowler in the last edition. He picked up 8 wickets and had an economy rate of just over 6 runs per over. He also scored 48 runs.

Paras Dogra was brilliant with the bat for Puducherry in the last edition, as he scored 187 runs in 7 innings. He had an average of over 30 and a strike rate of over 125. 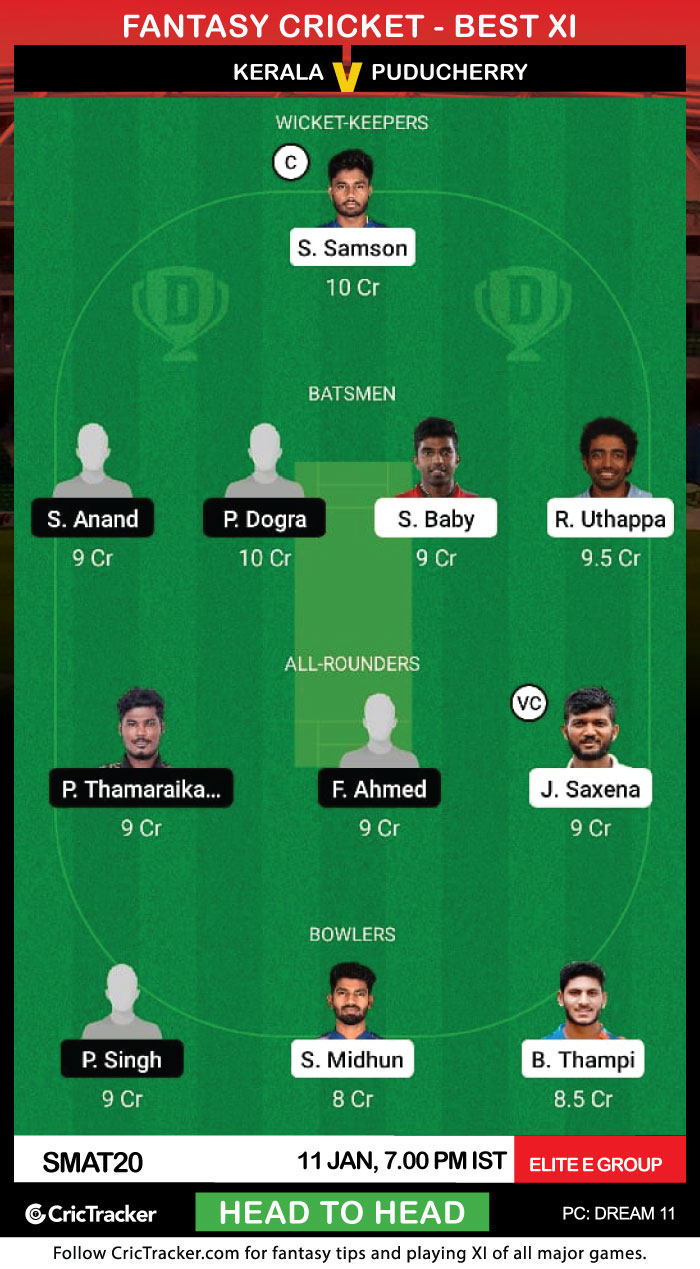 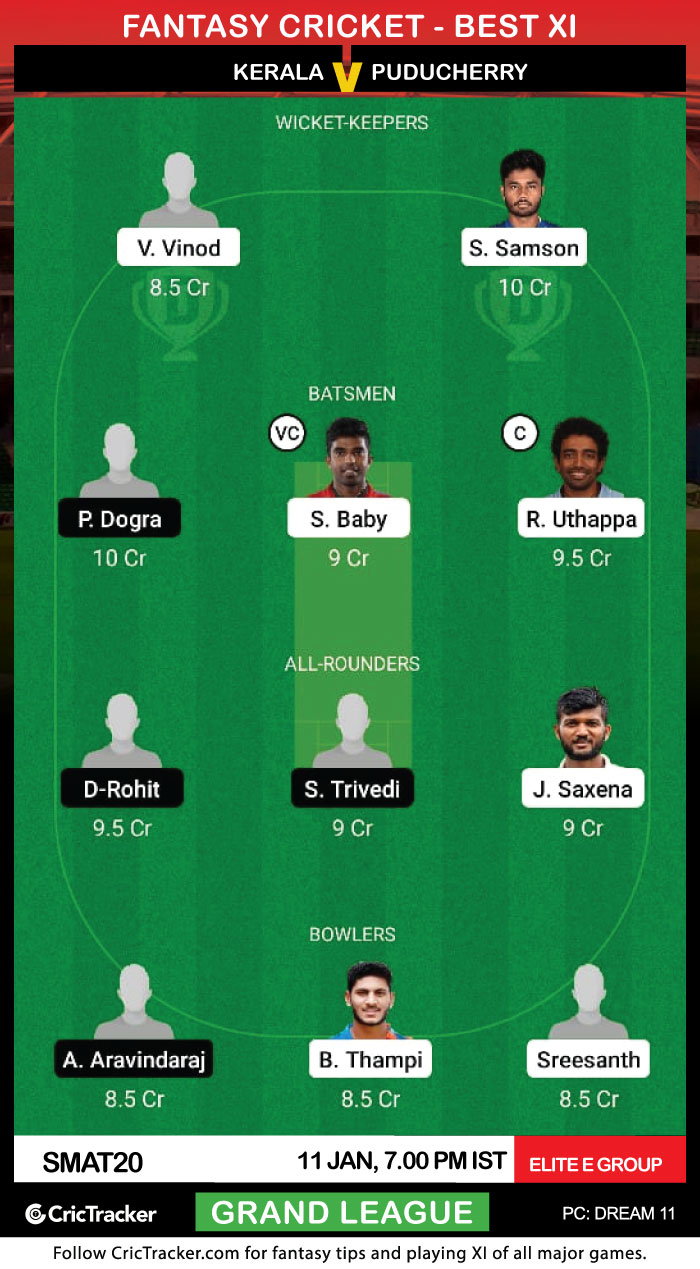 S Anand scored 171 runs in the last edition, which came at an average of almost 25 and a strike rate of over 100. He can be a decent budget pick at only 9 Cr.

Kerala are expected to win this match.